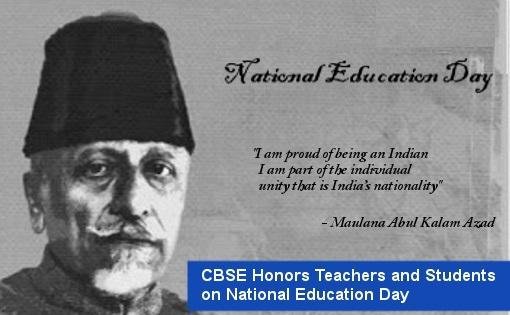 11th November is considered as a National education day every year in India since 2008. It was decided on September 11, 2008, by the Ministry of Human resource development (MHRD) to declare 11th November as national education day. This day is celebrated without declaring it as a holiday across all schools/ colleges and is observed to show respect to India’s first union minister of education Maulana Abul Kalam Azad. It is his birth anniversary on this day, who served India from 15 August 1947 to 2 February 1958. University Grants Commission was established by him after India got independence. He was awarded the Bharat Ratna for his work and contribution as an educationist.

Education is one of the necessities in everyone’s life. A country’s development is dependent on the citizen of that nation for its growth. A high literacy rate contributes to the success of the country. People must be made aware of their responsibilities and duties towards the progress of the nation. Educated population brings about necessary change in the right and positive direction, hence to encourage a positive attitude amongst the citizen’s national education day is declared on 11th November since 2008.

Many activities are carried out on this special day by various educational institutions, schools, and colleges. Activities such as seminars, essay-writing, elocution competitions, rallies, competition related to cards and slogan making and various workshops are carried out. This is done to direct students towards learning and development. The main objective of the national education day is to bring about healthy educational institutions in the country. A healthy educational system is possible only when the quality of education is increased every year in proportion with the technological and economic development taking place in the country.

Maulana Azad’s birthday is considered to be a national education day because he led the foundation of the education system in an independent India. Evaluation of the country’s performance in the educational field is necessary and important for better progress of the nation. In one of his speeches, he marked that basic education is the birthright of every individual and it must not be forgotten. Being chairman of the central advisory board of education, Abul Kalam gave importance to adult literacy and education.

He cultivated the importance of elementary education, secondary education, and its diversification. He was responsible for starting the Indian Institute of Technology in India in 1951. He was also responsible for setting up a department of education at Delhi University which was initially Central Institute of Education, Delhi. He founded the Jamilia Milia Islamia University, Sahitya academy, and Lalit Kala academy. He was the man behind setting up and propagating IITs, UGC and many other universities that are responsible for spreading educational importance in the country and for giving well-educated citizens to the nation. He promoted research and development, higher studies and free education in the country. School of IISC and School of architecture and planning was established by him. As per him, women must be considered in education as without whom national education would flourish in real terms.