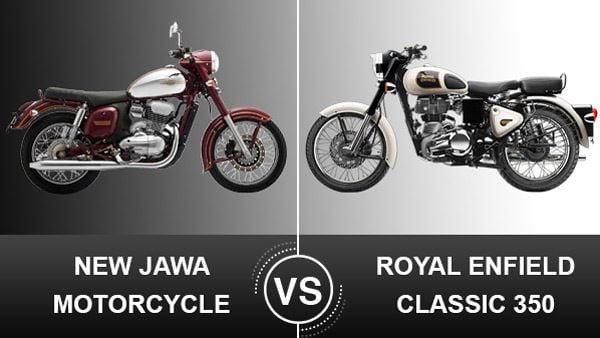 While Royal Enfield is an Indian motorcycle manufacturing brand in India, Java or Jawa is manufactured in Prague, Czechoslovakia. Royal Enfield was first produced in the year 1901and is the oldest motorcycle brand in the world. The Royal Enfield was chosen as the most suitable motorcycle for police and army at the borders by the Indian Government. It sells bikes in more than 50 countries. Frantisek Janecek was the founder of the Java motorcycle who brought the motorcycle division from Wanderer. The name comes after concatenating the first two letters of Janecek and Wanderer that make Jawa. In December 2018, it got resurrection in India by Mahindra by entering into a licensing deal. Both are retro bikes and hence are tough competitors.
Jawa twins’ i.e. Jawa and Jawa forty-two with compete with Royal Enfield Classic 350. As per specifications, Jawa is a much better choice than Royal Enfield.

Price and refinement: – The price of Royal Enfield starts from 1.46 lakh while that of Jawa starts from 1.64 lakh. Java is based on mojo engines while royal Enfield has cast iron or aluminum engines. When it comes to the refined and engineered bike, Jawa is a better choice.

Fuel: – The fuel delivery system in Royal Enfield is standard carburetor based while in Jawa it is advanced fuel-injection. This provides better acceleration, response, and performance. The advanced fuel system turns out beneficial to the Jawa.

Gear;- A gearbox makes a difference in the type of journey. Rider benefits from Jawa on long-distance Journeys. Royal Enfield 350 runs in the range of 80 to 90 km per hour. Stress is reduced on engines on sixth gear. Royal Enfield Classic 350 has a 5-speed gearbox while Java has a 6-speed gearbox. This difference enables Java to run smoothly on 100 kilometers per hour.

After-sales service: – Royal Enfield wins the game here being the oldest motorcycle company while Mahindra is new to the network. Overall jawa is a better bet than Royal Enfield.